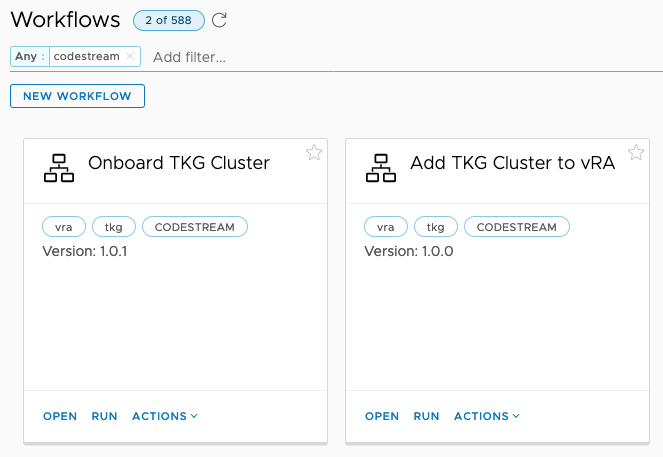 It’s intended as “the art of what’s possible”, and to allow vRealize Automation customers who don’t yet have access to VMware Cloud Foundation 4 (and therefore vSphere 7 with Kubernetes), or Tanzu Kubernetes Grid Integrated (formerly Enterprise PKS), to test-drive TKG. The VMware Tanzu portfolio has several offerings designed to provide a range of solutions for customers bringing cloud-native application workloads to production – Cormac Hogan has written a great blog post on understanding the Tanzu portfolio.

All the code used in this example is available in the VMwareCMBUTMM/vra-code-examples repository.

The following components need to be in place to support the deployment:

Download and import the latest com.vmware.cmbu.tkg package from our GitHub repository. The package consists of two workflows and 23 actions to support the onboarding of the TKG clusters, and can be imported to Orchestrator under the Assets > Packages page. The workflows must be tagged with CODESTREAM to ensure they are available to the Code Stream vRO task.

Finally, the vSphere endpoint needs to be added to Orchestrator, if it’s not already, using the Library > vCenter > Configuration > Add a vCenter Server instance

Within Cloud Assembly we need to have the vSphere Cloud Account, a Cloud Zone and a Project configured to allow the onboarding of the TKG VMs.

Add the local vRealize Orchestrator instance, and the Docker host to the Code Stream endpoints. This enables CI and vRO tasks in pipelines.

Variables within Code Stream allow us store configuration that can be re-used in the pipelines, including secret information such as passwords or SSH private keys. Variables are scoped on a per-Project basis, so you can have different configurations for different projects. Variables can be created using the API, so I’ve included an example JSON file in our repository to facilitate, and an example curl API call below.

Remember to update the example values to reflect your own Docker host, Git repository, MyVMware, vCenter and vRealize Automation details.

Modify the two pipeline YAML files to update the project and endpoint names (search for “endpoint” in each file and review the names), if you don’t do this you may have to reconfigure the pipeline later. Import the pipeline using Pipelines > Import. Once imported, the pipelines will be in a disabled state, and will require configuring, enabling and releasing.

On the Input tab you can see the various inputs and some default values. These inputs will be presented later using a Service Broker custom form, and the “advanced” inputs (those with defaults) will be hidden behind an “advanced” option checkbox.

The Model tab shows the various pipeline stages and tasks. In this case we only have a single stage and five tasks.

Once the Pipeline has been configured and saved, it can be enabled and released so that Service Broker can consume it as a catalog item.

The pipeline does not produce any output, so we can ignore the Output tab.

The TKG Workload Cluster pipeline is configured in the same way as the TKG Mangement CLuster pipeline, first by configuring the Workspace tab and then by reviewing the Input tab (which has far fewer inputs required). The Model tab shows a slightly longer pipeline, but works in a very similar way:

Note: Ensure that both the Management and Workload pipelines are both Enabled and Released from the actions menu.

Configure the Service Broker to provide catalog items with custom forms for the pipelines, which provides a slicker user experience when requesting the TKG clusters.

Under Content & Policies > Content Sources, add a new Code Stream Pipeline source and configure it to import from the same project you imported the pipelines to:

Once you save and import the source, it should show 2/2 items imported (assuming you’ve only released the two TKG pipelines).

The custom forms created for the pipelines use several vRealize Orchestrator actions (imported as part of the package earlier) to lookup information from the vCenter endpoint and populate dropdown lists based on previous choices (e.g. only display networks that are available in the selected vSphere cluster). There are also validation rules on the TKG cluster name, and the “advanced” inputs are hidden in an advanced tab, accessible by selecting the “Advanced” checkbox, and dropdown options configured to describe production and development clusters, and t-shirt sizing for TKG VM nodes.

Finally, we should be ready to test the TKG deployment!

We can’t deploy a workload cluster without a management cluster, so lets deploy one!

This results in a deployment being on-boarded into Cloud Assembly.

Now with the TKG management cluster available, we can deploy workload clusters as required:

The TKG workload cluster is deployed and imported into a Cloud Assembly deployment:

From this point we can consume the Kubernetes cluster in Cloud Assembly, or in Code Stream and begin deploying applications to the clusters. We can also download the kubeconfig file from the endpoint, or from the git repository and use that to manage Kubernetes.

I hope you’ve enjoyed this post showing the art of the possible with vRealize Automation!