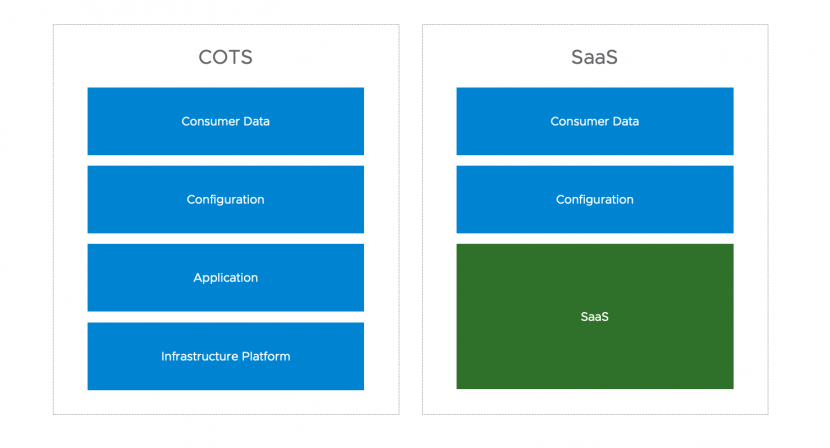 This is article hopefully will give an architectural insight on all the different components that differentiate commercial off-the-shelf (COTS) from SaaS or vice versa. This blog provides details the difference so that you can make a decision which of the 2 delivery models is best suited for your situation.

Before diving into the details let’s first define what the two term actually mean :

Custom Off-The-Shelf (COTS) : Software that is build and maintained by a 3rd party vendor. The software can be purchased or leased. Given the consumer the right to install and operate the software. Consumer is responsible for the management and configuration of the software

Over the last decade there has been an increase in consuming SaaS. The preference of Enterprise customers is to go SaaS first before considering a COTS solution. Which is kind of a natural movement as enterprises are moving away from managing and maintaining everything themselves. They want to consume the software, but not host and manage it. Great examples of that would be Salesforce.com, Office 365, Adobe, etc.

However, due to technical debt, regulations, compliance requirements or other reasons there is still a need to sometimes not go for the option of SaaS.

As with everything in IT, SaaS has become one of the option, but not the only option. This article will explain the differences between the two. Giving you the insights what to choose from when making the right decisions for your situation.

Operational impact of COTS vs SaaS

From an operational perspective there is are of course differences between COTS and SaaS. As typically COTS software is software that you need to install, configure and manage yourself. Whereas SaaS is something you consume and the SaaS provider is responsible for a lot of stuff.

To illustrate this, please have a look at the following table. Explaining the operation differences when it comes to COTS and SaaS solutions.

As you can see there are a lot of benefits from an operational perspective when moving to a SaaS solution. A lot of operational responsibility moves to the SaaS provider. Which makes it easier for the consumer of the platform.

Financial Impact of COTS vs. SaaS

The primary reason most enterprises are moving to a SaaS solution due to the fact that it is perceived on being financially more attractive. And I’m stating “perceived” here as there are many factors when it comes down to comparing hosting and managing a COTS solution yourself versus a SaaS solution.

For most Enterprises it comes back the convenience of payment by subscription. Which is typically the model that is applied to SaaS offering for the services that are consumed. The service is metered and you pay for your usage.

In case of Enterprise consumers there typically also is a contract involved where the consumer commits to a minimum amount of consumption or spend with the SaaS provider. The contract is most of the time an agreement of 1 or 3 years.

And this is the point where people start to make the comparison between the license costs of a COTS solution and the costs involved consuming a SaaS service.

However that comparison does not include the additional costs that it takes to host and manage COTS application. There is a value associated to the operational benefits (see again the table above) that you gain by moving to a SaaS solution. That value also needs to be made when making a comparison.

Traditionally VMware has been a software vendor that provides COTS software. You buy the product license, which you then own, with Support and Subscription (SnS). The latter gives you access to support and the ability to upgrade the license as long as you have SnS.

Now with customers moving towards SaaS as the consumption model, VMware has decided to also offer its software as-a-service.

In the Cloud Management software portfolio we now offer all our software as a COTS solution and with a SaaS offering.

We have adopted a SaaS-first policy. Meaning that every new feature will first be build into the SaaS offering. After deploying that feature we will then roll it up into an update that will be made available to the COTS solution. This way we ensure that COTS will also be up to date. And the advantage is that the software has already been tested.

For more information on the SaaS offering see cloud.vmware.com.

The post An Cloud Architects Perspective on COTS vs. SaaS appeared first on VMware Cloud Management.